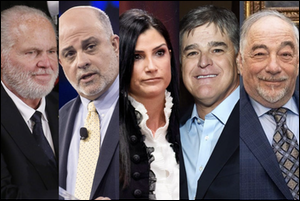 “Donald Trump is a delusional narcissist and an orange-faced windbag,” Kentucky Sen. Rand Paul said in 2016.

“Whatever lie he’s telling, at that minute he believes it … the man is utterly amoral,” Texas Sen. Ted Cruz said of Trump in 2016.

What explains that transformation, if not pure political calculation? The answer is, well, you know what the answer is.

The thing is, there’s another transformation that’s taken place that ought to be every bit as discombobulating to the rest of us as watching those Senators bend over and let Trump take away their humanity, principles and really, their being.

First, let’s try to agree on one thing:

We all live on what so far, appears to be an absolutely unique speck of mostly granite, and a truly infinitesimally small sphere, one among trillions of others we know exist and, we know we have no choice: we’re in it together, for better or for worse.
We are a nascent species, and at this very moment forever still hurtling through the vast emptiness and infinite depths of a mysterious universe. Each one of us, to the best of our knowledge, are solitary souls, or separate beings, if you prefer, and so in the end, we are ultimately alive, but alone. We are of course uniquely alive, for instance in that we have a conscience, and our own free will. Almost all of us are individually capable of expressing anything we choose.

The above hopefully represents something that we can all (more or less) agree on right now. Such a feeling between those voting Trump and who know for certain they will not, has become quite unusual. This wasn’t always something so remarkable that we had to stop and remark about it, but something has changed over the past several years, and I think if nothing else, we all need to know for sure precisely what changed. Specifically, the question is: What changed us so remarkably into two, diametrically opposed, “tribes”?

Whatever the change, the transformation that occurs seems to be the very same one that so mysteriously struck the Senators quoted above. One minute they are unanimously sound just like a liberal who opposes Trump today, and the next they appears either stubbornly unwilling to even consider the possibility that something untoward is going on with him, and his administration.

It has been difficult for many of us who have witnessed this transformation first-hand, up-close and personal. We’ve seen people who we considered dear friends, family members, co-workers, and neighbors, who one day felt they had long-been mostly on the same ‘wavelength’ and then over the course of just a few months, we’ve all seen collective millions of our fellow Americans literally transform before our very eyes.

Beginning with Conservatives and how Progressives largely agree they (Conservatives) have changed, most say that it began with a person they had always regarded as morally “right”, or at least morally “average”, and with whom they observed a regularly expressed set of principles, judgments, attitudes, and/or ethics. Remember, this refers to individuals who as a whole group, all amounted to people they felt they should, could, and did respect. In many cases, they would even say people whom they loved.

Some of those same people are still deserving of our respect, and they should all be loved, in that sense we all know is right, proper and even prudent. They may represent much more to us than the definition a typical Trump Enabler can capture, and thereby to that degree makes so otherwise reprehensible. So that what’s left is that part of their person we once knew to be part of their “better whole”, before they changed.

But did they (change)? If so, how did this happen? If they didn’t change, and so they are who they always were, then why did they hide that part away from everyone, because that would seem to be very telling, now wouldn’t it?

Where did that other part of these people go, the part that we mistakenly thought of as “better”, than that which they’ve now shown us. Why did they sacrifice that part of what we saw as their “higher self”, and allow it to become what is the inherently incompatible self-identified Trump loyalist?

How is it possible that these people we knew, suddenly don’t seem to care about the reputation, character, corruption and crimes —from high crimes to misdemeanor and almost everything in between, which they have very well knowingly attached themselves to inextricably. Why even now, do they insist on re-trenching and becoming even further immune to the facts and reality that surrounds them?

People will say that what I’m getting at amounts to almost nothing. They will say:

Yes, but so what because “they can say the same thing about us”.

Wait. It’s time to take a closer look at that claim, and it begins with asking this question:

Can they, really? Are they right, fair and even-handed in saying so? Do they even genuinely believe it?

I believe that not only do I already know the answer, and that many others do also, but I also believe that the rest of us have merely forgotten they know the answer, also. They’ve forgotten in part because, in their rush to be true progressives and politically correct, they’ve forgotten that compassion, inclusion, forgiveness, kindness, and accommodation is NOT something we each owe to every single person.

After all, whether you’re a Christian, a Muslim, Hindi, agnostic or atheist, such attributes come part and parcel with either those beliefs, or in the knowledge that our collective “social contract” necessitates it. In other words,

We wouldn’t get very far as a society, a nation, a people or a civilization, if the majority of us failed to respect and uphold these values, and most of all, observe and practice them in our daily lives.

A paradox for any responsible human-being turned Trump Enabler.

Because first of all in the near-term, you must now sacrifice your purpose for living insofar as knowingly having nothing to do with either contributing to the long-term health of society nor with that of the planet you live on. No amount of pretending otherwise, or claiming it “just ain’t true!” —no amount of hollering “fake news” in the face of reality and regardless of how hard one holds fast to a professional liar like Limbaugh, Hannity, Savage, Fox & Friends or the president’s press secretaries (now and since) —NOTHING can change the FACT that Trump himself is virtually the embodiment of the attitude, beliefs and actions that stand diametrically opposed to those beliefs and virtues which are central and essential to the long-term survival of the human race.
Say what!?

It’s true. We know it, and the Trump Enabler knows it. And this crucial, solitary fact is what gives us license and the leeway to suspend, ironically, some of those very traits we know belong to the question of our very survival as a species. It’s not “the lesser of two evils”, but rather the choice we are each given to use our own good judgment as to when and to what degree someone among us merits these virtues.

Because it’s not “compassionate” to stand back and let someone steal from their own charity, nor to watch them bad-mouth our war veterans. It’s not “compassionate” to stand-by while someone who dodged the draft repeatedly and brutally criticize a former POW and one who not only managed to survive that war, but did so and then went on to become a Senator of the United States of America. and a genuinely good person. Is it??

The idea of “inclusion and accommodation” of each other’s differences is not served when we allow in and provide shelter and sustenance to a rapist, nor to a traitor, and not to a leader who deliberately echos an order to hunt down and kill at least 1-in-3 of our fellow citizens. Is it??

It is not “practicing good” nor do we tend to the well-being of another when we provide a platform or vehicle to a group of people led by someone who currently has the power, policies, will and intent, to continue to destroy the delicate balance of this beautiful rock we all necessarily share. Is it?

If practicing what you preach means being who you are, then when you start preaching only what others say, you have made who you are an empty human vessel, a human-being who is in the practice of being someone else. 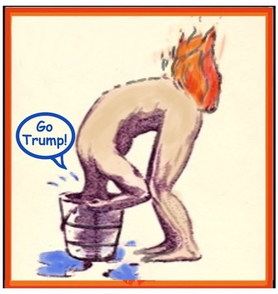 Duh! Are We Stupid?